Although steeped in history, Layer Marney Tower is not a museum but a family home.  Lived in by the Charrington family, Nicholas was born here and he and his wife brought up their four children here.  The Tower is an unfinished Tudor Palace, built by Lord Marney, friend of both Henry VII and Henry VIII.  The building was to be three times larger than the vast building it is now, but Lord Marney died in 1523 before it was completed and his son died two years later, with only daughters left, they were made wards of court, the vast estates sold off and it was never finished.

Climb the 99 steps to get to the top of the Tower and magnificent views to the River Blackwater.  Marvel at the ornate Italian architecture with its fantastic terracotta figures decorating the top of the Tower and round the windows.  Explore the old Tudor stables, now the Long Gallery where up to 140 can be seated for lunch or dinner.  Don’t miss the mediaeval barn or the nearby church with it’s Tudor Tombs and mediaeval wall painting of St Christopher.

Enjoy a stroll round the gardens and cream tea in the Tea Rooms.

You won’t be disappointed in a tour of Layer Marney Tower you will be made to feel very welcome. 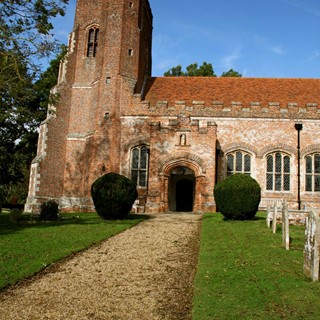